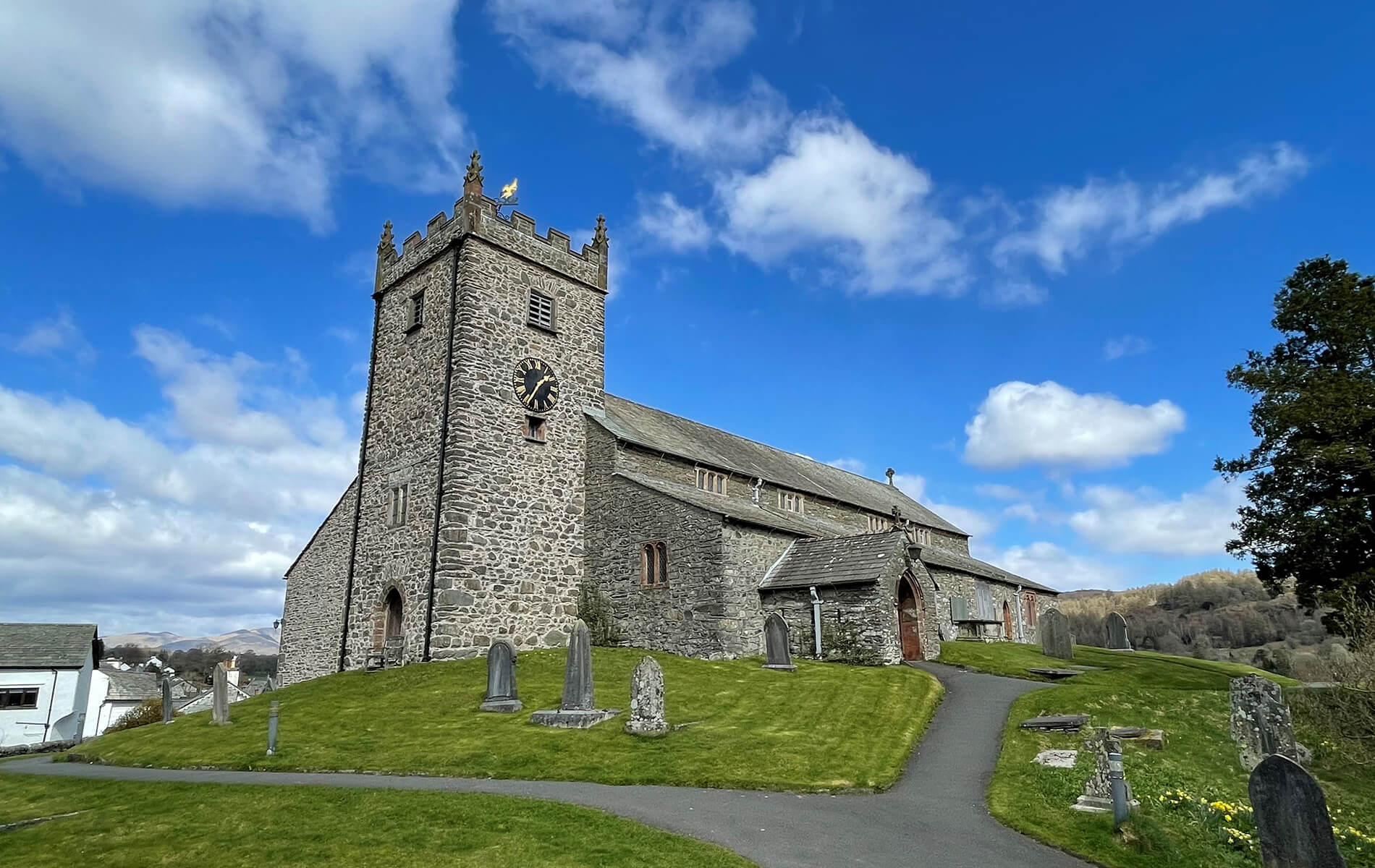 Here is a bit of the background to the sturdy beauty of Hawkshead Church, where there has been a place of Christian worship and prayer for over 800 years. This information is also available in the church itself, which is open for visitors during the day. 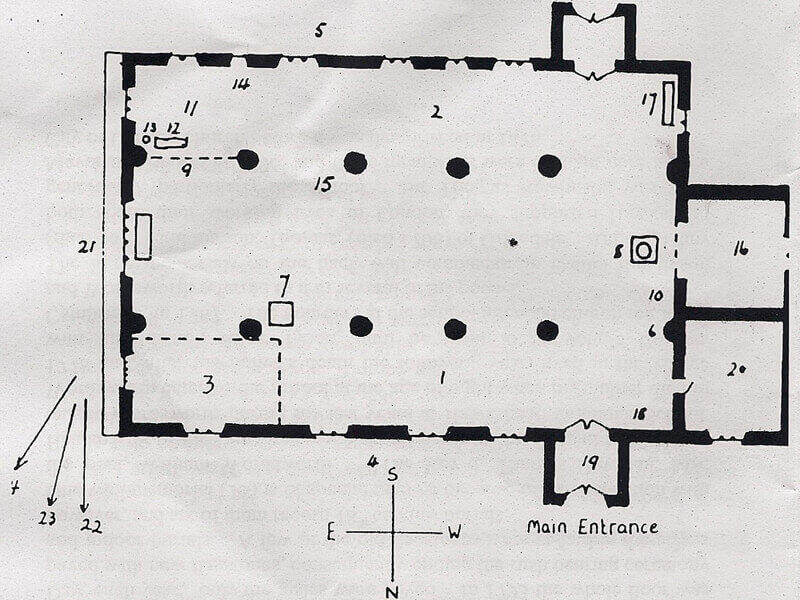 There was a chapel on this site in the 12th century, which was enlarged to its present length about 1300. It was widened in 1500 by the addition of the two side aisles (see plan: 1&2) with their massive pillars and round arcades, which are found nowhere else in England. So the church was basically as it is today from the beginning of the 16th century. At that time it was an outlying 'chapelry' of the Abbey of Furness at Dalton, but became a separate parish in 1578. This change was due to Archbishop Sandys.

Edwin Sandys was born near Hawkshead in 1519. He had to flee the country during the reign of the Roman Catholic Queen Mary Tudor but, when Elizabeth I succeeded her, he returned and was made Bishop, first of Worcester, then of London, and finally, Archbishop of York. He founded a Grammar Schoolin Hawkshead in 1585 and, in the same year, built a private chapel (3) in memory of his parents, which is still used by the Sandys' family. The stone-carved table-tomb shows his father in full armour, a lion at his feet, and his mother in a long gown. You will notice the Sandys' family crest and Edwin Sandys' initials.

About the same time, 1585, the roof of the nave was raised and clerestory windows - four on each side - were installed to give extra light. The clerestory windows on the north side (4) still have their Elizabethan oak frames and mullions. Those to the south had to be replaced with stone after only fifty years (you can see the datestone, 1663 (5), high upon the wall). The oak beams of 1585 still support the roof of the nave.

The framed texts painted on the walls

This kind of decoration was widespread in the 17th century (Grasmere and Windermere churches had similar paintings, but they were whitewashed over and lost).

In 1680 James Addison of Hornby, near Lancaster, was invited to Hawkshead to clean the church walls and 'peint 26 Sentances of Scripture ... and to border and flourish them.' For this work, and for painting the borders round the pillars and arcades, he was paid the equivalent of £7.60! A local decorator, William Mackerath, repainted some of them in 1711/12 and added some of his own, including the list of churchwardens on the west wall (6) and the 'sentence' in the nave near the pulpit (7) with the engaging dialect 'and t'word was God'. The borders of simple flowers and cherubs are very appealing, but they were whitewashed over in 1794 and only came to light again in 1875.

By the 1870s repairs were urgently needed and 1875 saw the start of some far-reaching repair work and restoration. Between 1875 and 1900 the lime render was stripped from the outside walls to be replaced by Portland cement pointing and the top of the tower acquired battlements and pinnacles. Several of the plain windows were re-glazed with stained glass, and a new pulpit (7) and font (8) were installed. The latter move so infuriated local people that they secretly buried their beloved old font somewhere in the churchyard, although no-one knows where! The east window above the altar (which used to be more or less rectangular ) was replaced with a an arched window in a pseudo-perpendicular style , while lavishly-carved oak screens appeared around the Sandys' chapel, behind the altar and in the choir. William Bolton of Hawkshead repainted some of the murals. The restoration work was undoubtedly necessary but, for modern taste, the elaborate carving and East Window do not match the simple dignity of the old building. 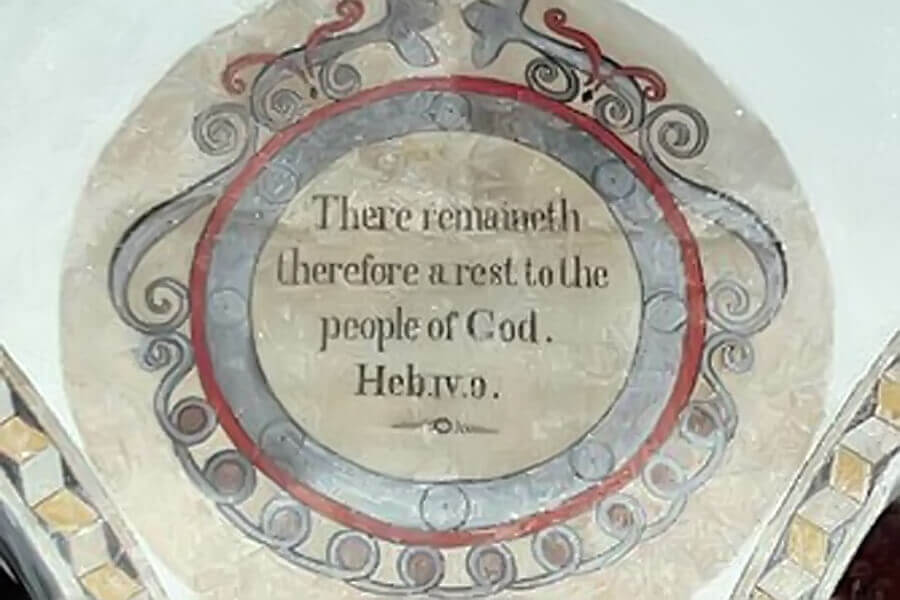 The Organ & The St. James' Chapel

In 1965 Rushworth and Dreaper of Liverpool built a new pipe organ. The console is in the choir (9) and the pipes (10), which are cradled in locally grown oak, make a fine architectural feature high above the back pews. Organ recitals were arranged to give people the opportunity to hear the new instrument and these developed into the 'Music for a Summer Evening' concerts, which are held every Tuesday evening at 8.00 p.m. during July and August.

The rearrangement of the organ released space to establish a chapel (11) dedicated to St. James, patron saint of pilgrims. Look for the symbols (rucksack, boots and waterbottles, etc.) embroidered on the kneelers by church members. There are Viking designs on the kneeler at the communion rail as a reminder that Hawkshead (Haukr-saetr) had Norse beginnings.

While you are in the chapel, have a look at the unusual old chest (12), which was made in 1603 to store parish registers, probably from one of the much older beams that were taken down when the roof was raised in 1585. The stone ball used to be on the roof above the large east window until it was replaced with a cross in 1875. A medieval priest's door (14) was rediscovered in 1965 (it had been walled up in the Victorian alterations) and was made into a plain glass window, giving extra light inside and splendid views of Claife Heights outside. 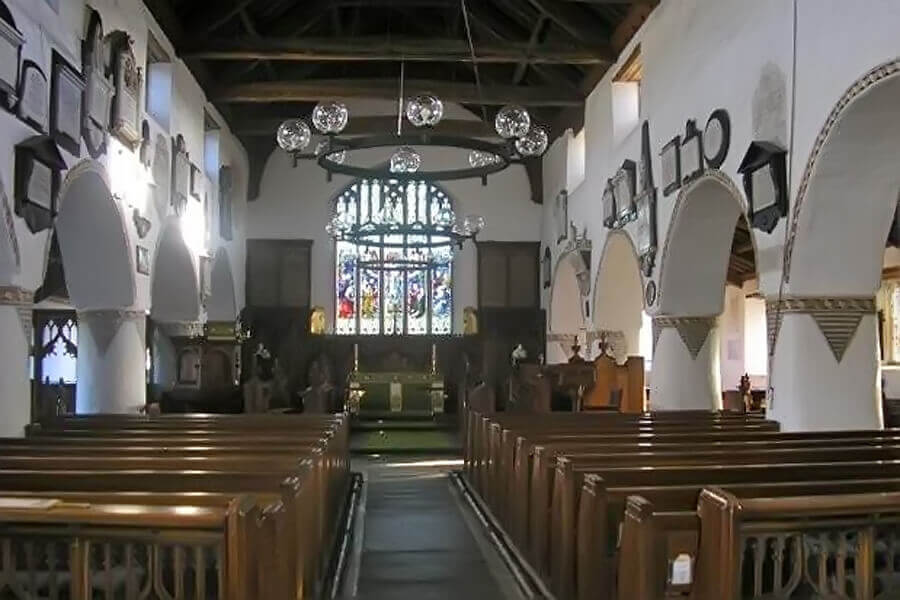 Until the 18th century people were buried inside the church and the bare earth covered with rushes, which were removed on July 25th, St. James' Day, each year; only the aisles were paved. In 1793 the whole floor was paved with new flagstones, consequently ending the rush bearing ceremony and indoor burials. A few of the old flagstones were re-laid in the aisles, however, and six of them record 18th century burials.

One wall memorial (15) is of special interest because of its connection with the poet, William Wordsworth. 'The Rev'd. Thomas Bowman, MA, Headmaster of the free Grammar School' came to Hawkshead in 1785 and taught Wordsworth during his last years at Hawkshead Grammar School. Wordsworth came to the school at the age of eight when his mother died in 1778 and, after his father's death the following year, lived in the village with his 'dame', Anne Tyson, until he went to St. John's College, Cambridge, in 1787. The boarders at the school attended church regularly, and Wordsworth referred to it in several of his poems.

The large memorials on the back wall commemorate Daniel Rawlinson (died 1679) and his son, Thomas, (died 1708) of Grizedale. Although they both spent their working lives in London, they supported Hawkshead generously, particularly the school. Sir Thomas Rawlinson was Lord Mayor of London in 1706, and these memorials were brought here from a City of Londonchurch before it was demolished in 1878.

Some other features of interest

The Belfry (16) has had a peal of bells since 1765, which, in 1958, were re-hung and two new ones added to make a full peal of eight bells. In 1985 an upper floor and staircase were built for the ringers; the choir use the ground floor as a vestry. Because the heavy bells could be a danger if interfered with, the belfry is kept locked. There is more information about the bells and belfry here.

The Clock: there must have been a clock in the tower since the 1600s because a carpenter named Cuthbertson Hodson made a new clock face for it in 1790 at a cost of 2s.6d (£121.02p!). The present clock dates from 1876 and, to mark the beginning of the 20th century, Colonel Myles Sandys gave the clock face on the south wall of the tower.

A local magazine covering the Parishes of Hawkshead, with Low Wray and Sawrey, Rusland and Satterthwaite